It’s hard to miss the fuss about olive oil. Even casual magazines often refer to its health benefits and how we definitely should be including it in our diet. Words like polyphenol antioxidants are thrown around, as if we all have chemistry majors and know what they mean.

So – What Does the Word Polyphenol Mean?

Let’s take a look – polyphenol – and see if the name tells us why we should eat them.

The synthetic phenols are used in everything from wood preservatives and paints, to friction linings and epoxy resins, and rubbers and …

Whoa – that sounds – um – unappetizing – which is why we we’re not interested in the synthetic phenols right now. The polyphenols we are interested in are from natural sources. 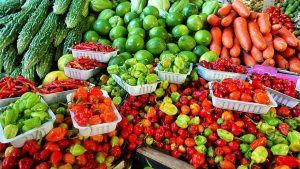 Natural polyphenols are extracted mostly from fruits and vegetables. Olive oil too, contains many polyphenols  and has been proven by researchers to help cleanse our bodies and rid us of toxins and other alien matter. Other polyphenols are found in certain natural cereals and legumes, chocolate, and some beverages (tea, coffee, some juices and red wine).

What makes scientists keenly interested in polyphenols is the fact that they are powerful antioxidants.

Oxidation – sometimes called free radicals in our cells – is our enemy. It is a significant contributor to aging, inflammation and disease. And through their cleansing action, antioxidants interfere with or prevent aging and disease, helping to keep us healthy. 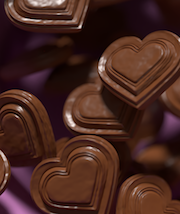 Unfortunately, contrary to popular song, we do need more than love.Chocolate helps, in moderation because, when it’s dark and fresh, it does contain polyphenols.

Polyphenols help prevent the gradual blocking of the arteries and blood vessels that seems to come with age. This blocking is caused, at least in part, by oxidative stress and bodily inflammation. So a diet rich in anti-inflammatory foods, will help to lower our likelihood of heart problems. And that brings us back to foods containing the antioxidant polyphenols.

Other useful polyphenols studied, have included those from onions, black tea, red wine and grape juice, and berries. Cardiovascular health is significantly higher in the people from countries who regularly eat these products as part of their diet. 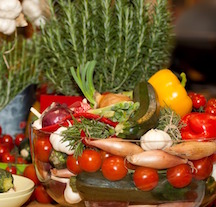 What is called the French Paradox is believed to be a direct result of eating a diet high in polyphenols.

In spite of being smokers, and eating a diet high in saturated fats, the French have a much lower incidence of heart diseases than North Americans.

As we all know, cancer is complicated. We are neither sure of what causes it, nor how to cure this dreaded disease, although theories are plentiful. However, research is ongoing and there are encouraging demonstrations of positive results.

What we do know is that polyphenols have been shown to have a protective effect on our cells and inhibit the number and growth of tumors. (6) This result was seen in several places in the body including mouth, stomach, liver, lungs, breast, prostate, colorectal and skin cancers.

Different polyphenols affect different parts of the body in different ways. In several studies, common polyphenols, including isoflavones from soybeans, tannic acid from tea, resveratrol from grape skins and red wine, quercetin from onions, flavonoids from berries, and ferulic acid from vegetables, have all demonstrated a positive anti-diabetic protection. (7,8,9,10)

Several studies looking at the effects of polyphenols have shown definite, positive anti-aging effects. One, using flavonoids from spinach, strawberries and blueberries was effective in treating age-related deficits in brain and behavioral function in as few as 8 weeks. (11)

Brightly colored fruits such as berry fruits and concord grapes and grape seeds have been shown to have a potent antioxidant/anti-inflammatory influence. (12)

A different study has shown that a polyphenol from green tea (catechins) may also delay the onset of aging. (13)

And the research continues…

Oxidation to the cells is one of the most destructive factors to note in diseases such as Alzheimer’s. Affecting over 18 million people in the world, it is a neuro degenerative disease.

Because polyphenols are strong antioxidants, eating foods containing them may be a valuable resource for protection. (14,15,)

One study of the Mediterranean diet showed that the people drinking 3-4 glasses of red wine per day had 80% less dementia and Alzheimer’s than those who drank less or didn’t drink red wine at all. (16)

Positive effects of polyphenols have also been shown on Parkinson’s disease. (17)

One small study showed that olive oil was more effective than inbuprofen at relieving menstrual pain. (17b)

The continuing studies on polyphenols show that the whole issue is much more complex than the simple statements given here. Researchers have learned:

Over 500 polyphenols in 400 different foods, have been studied and tested, and over 1,600 scientific papers have been published on various aspects of the research.

Polyphenols, Like Some Other Friends, are Hard to Pin Down

It is clear that the anti-inflammatory action of olive oil is a direct result of the 8 to 17 polyphenols contained in the oils (depending upon the brand and the treatment it has received).

In patients who already have heart disease, the polyphenols in olive oil have been shown to reduce the levels of C-reactive protein, a blood measurement assessing inflammation. Anyone who is over 50 has probably already had that blood test, whether you know it or not, as it’s one way doctors assess your likelihood of getting heart disease.

One factor that makes it difficult for scientists to make the study of polyphenols an exact science, is that they are found in natural substances in different amounts.

The amount of any polyphenol in a cup of strawberries or a cup of olive oil, depends entirely upon how they were grown, degree of ripeness, how they were treated during processing, cooking and storage. That mango you ate in Mexico or the Philippines, where it grew to ripeness on a tree, was much healthier for you than the one you purchased in a more northern supermarket.

It’s important to know that 65% of polyphenols are destroyed when cooking in a microwave oven, and 75-80% are destroyed after boiling for 15 minutes.

Does that mean our food is not good for us after we cook it?

To Cook or Not to Cook, That is the Question

The relationship between our bodies and what we eat is not a simple picture. Polyphenols are only one important link in a complex picture that we still don’t fully understand. There are many other vitamins and minerals contained in natural foods (as opposed to packaged food).

But it does mean that cooking reduces the polyphenol antioxidants – the disease prevention qualities – of our food. And it does point to the benefit of regularly eating some of our fruits and vegetables raw. And it also points to the benefits of eating food grown closely to home as the polyphenols degenerate rapidly after the foods are picked.

But most of us are not scientists, so for practical purposes, we will benefit from eating the freshest fruits and vegetables we can buy and afford, including the highest quality olive oils. And eating some of them raw on a regular basis.

The Mediterranean diet, which makes a very liberal use of olive oil, has been the most studied diet of all time. Scientists believe that the high number of polyphenols eaten daily in the region contributes significantly to the health of the people.

Your mother knew what she was talking about when she said, “Eat your vegetables”.

In fresh and colorful fruits and vegetables – dark colored berries, leafy greens and olive oils – the slightly bitter undertone taste tells us that this is where the polyphenols reside. They contribute significantly to the protection of your health. Keep that in mind and try to develop a taste beyond the bland food found in supermarkets. It doesn’t take much, but eat real food often. 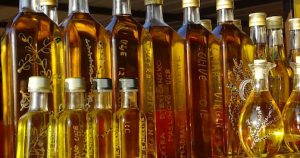 Did you know that of the 820 olive oils, from 26 different countries, entered into the world’s 2016 most prestigious olive oil competition, the United States won 50 awards – over half of them gold?

You can see the winners from all countries listed here: https://www.bestoliveoils.com/

Note 1. Much of the information for this article was drawn from much more comprehensive articles, published on PMC, the US National Library of Medicine, National Institutes of Health. In particular, article titled “Plant polyphenols as dietary antioxidants in human health and disease” by Kanti Bhooshan Pandey and Syed Ibrahim Rizvi, was extremely useful. It is located under Oxidative Medicine and Cellular Longevity. http://www.ncbi.nlm.nih.gov/pmc/articles/PMC2835915/#R85

Note 2. A comprehensive database on the scientific studies on polyphenols is available here: http://database.oxfordjournals.org/content/current