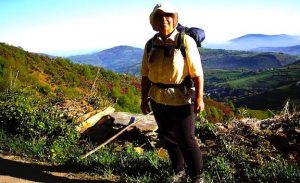 “You want to do WHAT? Are you crazy? Why would you do that?”

These questions, or stunned silence, greeted my comments to friends and family in 2003 when I said I was going to walk the 500+ miles of the Camino de Santiago in Spain. And the truth is – I didn’t really know if I was crazy to attempt this, or even why I wanted to do it.

But what I did know was this. I had one of ‘those’ birthdays – the start of a new decade. I was bored silly in my current workplace. My personal life was spent like so many women (and some men) of my generation – being too supportive of other people, helping others to live the lives they wanted, and not paying attention to my own. At that time it was expected behavior, now it’s called co-dependence. The space I had for myself in my life was very small.

And at the back of my mind, a little voice was nagging that one thing getting older meant was that if there was anything else I wanted to do with my life, I’d better get started.

But what were my goals for the rest of my life? What did other women do as under-challenged empty-nesters? I know I’m not the only one who has devoted her life to try to make sure others are happy (an impossible goal of course.) Did I have any hopes and dreams left for myself at this age?

Candidly- I didn’t know what I wanted to do – I just knew I wanted to change something. I needed something that was radically different for me, something that would make a statement to myself (not anyone else), and would affect me right down to a cellular level, that from here forward things would be different. From here on, I would be ‘on stage’ in my own life with more than a backup role. Brave new words – but what to do?

Then one day, I was explaining to my Spanish instructor why I was quitting my job. In our discussion about what made our jobs worthwhile, or not, she mentioned the Camino de Santiago (the Way of St. James) and that was it. I would walk the camino!

I think I walked 5 miles once – by accident.

New boots, new backpack, a hat, a map, raincoat, clothes… what else could I need? Oh yes – and an attitude that could be described as ‘fools rush in where angels fear to tread’.

So off I went – oblivious. The goal was to walk about 540 miles. I would begin in a small town in the foothills of the French Pyrenees, called Saint Jean Pied-de-Port and walk all the way across Spain to Santiago de Compostela and then to Finisterre at the ocean. There I would watch the same sunset where, reputedly, 2000 years ago, the Celts danced naked on the Summer Solstice.

And, according to some, I would be following the path where St. James worked after the Christ was crucified. Others insist this is also the path of the Milky Way. Still others say many of the earth’s leylines converge along this path – making it a place with a special energy. And did I mention that this is a religious pilgrimage for those of the Catholic faith? I’m not Catholic, nor do I belong to any other religion, but (like so many) I think of myself as ‘spiritual’. Who knows what that really means? 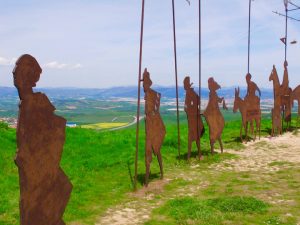 (metal statues depicting past pilgrims on their way to Santiago, named the Alto de Perdon, near Pamplona in Spain)

Well – this is not the place I want to talk about the details that trip, except to say that it was the hardest, most glorious, most interesting, most wonderful thing I have ever done. Did I mention the hardest – and the most magical? 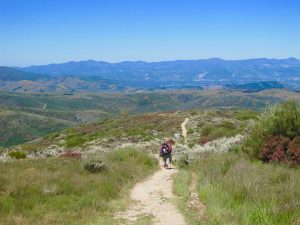 I ate and talked with wonderful people from many countries, walked through beautiful countryside and little villages all day, visited beautiful cathedrals and small bars, and attended Catholic mass – welcomed even as a non-Catholic. I gloried in the amazing wildflowers, the scenery, the friendships, the food, the wind and the café con leche.

To the call of the cuckoo bird and the sight of storks nesting everywhere in high places, I walked up endless hills and down into valleys, on clear or muddy, rocky and paved paths, and old Roman roads. And I passed through little villages, where the people lived in stone houses, over the top of their barn animals, and offered passing ‘pilgrims’ snacks, only asking for a blessing from Santiago when we reached the cathedral. In those villages, there seemed like endless cow ‘plops’ that were splattered for about 15 feet in all directions as a result of the new spring grass. Only during the days of walking through too many cow plops did I feel like quitting, and wondered, like every other pilgrim, if the call of the cuckoo was especially for me – “cuckoo, cuckoo”. But it wasn’t, and I didn’t quit.

I kept walking and I made it. I would walk another 50 miles or so to the west coast – to Finisterre, once believed to be “the end of the earth”. But I had made it. This next part was just a reward. 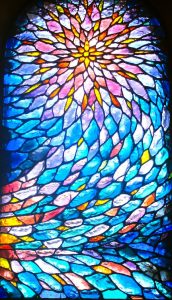 It is traditional for pilgrims to burn their clothes and boots at Finisterre. I didn’t, but some did. Thinking of tradition, though, I did contemplate a dance for the sun gods. I love the sun. In the end, I decided that this naked body at this age, was much more likely to prompt the sun gods to press the sunlight switch off, than to guarantee the sun would rise for the next season! So I didn’t do that either. 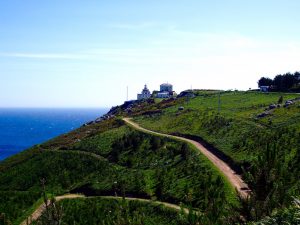 But I did sit on the rocks above the ocean at Finisterre, and watched the sun slowly sink down into the water – overwhelmed at the beauty, at the enormity of the tradition I had just taken part in, at wonderful things and people I had experienced, and at the joy it was to walk this 500 miles. 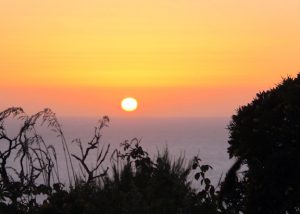 (sunset at Finisterre, on the west coast of Spain, once thought to be the end of the earth)

So now that it was finished, what did this trip do for me? I lost 20 pounds and became lighter of body, and more importantly of heart. I felt stronger, more flexible, more understanding, more clear and more myself. And surprisingly, I felt renewed and more vigorous and alive, even after putting out all of that energy.

I realize now it is important for me to continue to set high goals and challenge myself as I get older. The fact that I completed something that was 100x more than anything I had done in the past pleases me and gives me more confidence in other areas of my life.

In the last ten years I’ve walked that distance 3 more times and my next goal, is to walk 1000 miles in one stretch. Can I do it? I really don’t know. But I can take that first step and as many more as I can and see how far it gets me. Does it matter if I fail? I don’t expect to – but it’s not important. It’s keeping life’s sparkle that’s important to me.

What’s your life’s sparkle? What keeps you feeling excited about life? For me it’s partly long distance walking and everything that means to me, but there are many worthier goals. What’s yours? I feel like I am given an extra 5+ years of life, every time I walk the camino. Only time will tell whether it true, but I sure enjoy the feeling in the meantime.

As we have been told, many times, “The journey of 1000 miles starts with a single step”. Lao Tsu

What makes you feel alive and vital? What single step do you need to take?